More diverse cropping systems may enhance the abundance and diversity of beneficial arthropods, thereby influencing ecosystem functions such as biological pest control within the agro-ecosystem. But how do soil organisms respond to crop diversification? And how is the soil carbon cycle impacted? These are some of the questions being asked in the long-term field experiments within the DiverIMPACTS project. 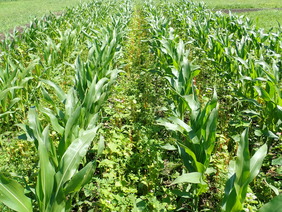 The response of soil microbiomes to crop diversification

Carbon metabolism is at the core of ecosystem functions. Microorganisms play a critical role because they use carbon supplied by plants, or their decaying material, as an energy source and growth substrate. They drive the soil carbon cycle by mineralising organic material and simultaneously contributing with their biomass to the build-up of the soil organic carbon pool. Carbon use efficiency (CUE) is a parameter that defines this impact on soil carbon flux at the ecosystem level. It refers to the proportion of carbon that supports microbial growth in soil and the determination of microbial biomass. Thereby, CUE can provide a better understanding regarding crop diversification effects on ecosystem carbon flow and release of CO2.

At the long-term field experiment in Hamerstorf (Germany), DiverIMPACTS is investigating the effects of diversified cropping systems on soil CUE, especially under different nitrogen fertiliser management practices. Three sampling campaigns over two years were conducted at this site; each sampling event generated 24 soil samples from six treatments for analyses. The preliminary results derived from the soil CO2 production and soil microbial biomass production showed differences in soil respiration rate and microbial growth rate between diversified and reference cropping system, which appeared to be more pronounced after the crop growing season than before. Further data collection, which is underway, is expected to reveal the impact of crop diversification on soil carbon processing.

More diverse cropping systems may enhance the abundance and diversity of beneficial arthropods, thereby influencing ecosystem functions such as biological pest control within the agro-ecosystem. In order to investigate the effects of different crop diversification strategies on aboveground predators and their biocontrol potential, we carried out further sampling in several field experimental sites during spring and summer 2020.

Ecosystem function assessments were conducted in field experiment (FE) 1 (Netherlands), FE2 (Germany), FE3 (Belgium), and FE8 (Switzerland), with the main objective of integrating the data collected during the previous sampling campaign. In Lelystad (FE1, NL), where different temporal and spatial crop diversification strategies are tested in order to break the maize monoculture, two sampling events took place during the last growing season. Preliminary results reveal differences in the activity density and biocontrol potential between monoculture and diversified systems, especially when a spatial diversification (intercrop) is involved. Further analysis of the data is needed to quantify the impact of specific diversification strategies on the biological pest control potential of generalist predators.