The network of 10 field experiments across Europe aims to demonstrate the benefits of crop diversification. Two of these field experiments are outlined below. Both are long-term experiments, which were adapted for the DiverIMPACTS project. The following questions will be answered: What is their starting point? Which strategies are tested? What are the expected impacts? 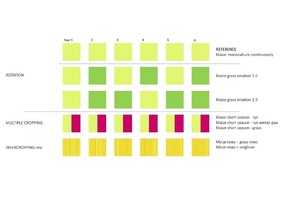 The design of Field Experiment 1 in the Netherlands 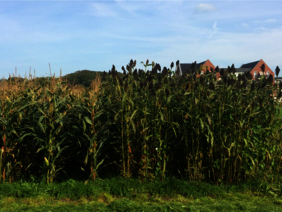 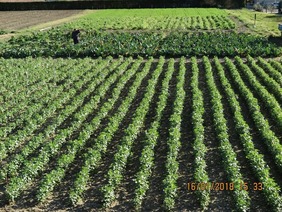 From monoculture to more diversified systems in the Netherlands (Field experiment 1).

Silage maize is currently the largest arable crop in the Netherlands (225,000 hectares), with a dominant cropping system consisting of continuous monocultures. In these standard cropping practices, the lack of diversification strategies leads to several undesirable effects such as soil quality degradation with decreasing levels of soil organic matter, sub soil compaction and increased levels of soil disease. This ultimately leads to an estimated yield gap of 4 tons dry matter/hectare/year. Diversification might hold answers to the challenges of production stability and ecological durability. Several diversification strategies have been investigated over the last few years at Wageningen University and Research: rotation of maize and grass (1:2 and 1:3), multiple cropping with short season maize and a fodder crop sown after the maize crop but harvested in May, the following year, before the next maize crop implantation. A third strategy to be tested the coming years in the context of DiverIMPACTS is intercropping maize with sorghum (row intercropping). We expect sorghum can positively contribute to organic matter levels, sub soil compaction, resource use efficiency and pest and disease resistance. The close connection with existing projects and networks on sustainable silage maize production, and links with one of the DiverIMPACTS Case Studies in the Netherlands (case study 1) offer multiple opportunities for co-innovation with farmers and feed companies.

The DiverIMPACTS field experiment 9, which is hosted within the MOnsampolo VEgetables organic Long Term Experiment (MOVE-LTE) that CREA (Consiglio per la Ricerca in Agricoltura e l’analisi dell’economia agraria), is running in the Adriatic coastal area of the Marche Region (Italy).

The MOVE-LTE is based on a four year rotation with six vegetable cash crops and three agro-ecological service-providing crops (belonging to different families), which started in 2001. The main objective is to assess the evolution of the agro-ecosystem in terms of agronomic, environmental and economic sustainability. The MOVE-LTE is one of the most relevant Italian key-spots for participative breeding research and initiatives for vegetable crops. The MOVE LTE is visited every year by many farmers and technicians and, during the routinely organised dissemination days, researchers and farmers interact for mutual learning on the development and the application of agro-ecological techniques. Farmers have often highlighted the need to diversify their cropping systems by introducing new species and cultivars with the aim to enhance biodiversity and income diversification and stability. As rotation and multiple cropping were already implemented in the MOVE-LTE, the strip cropping technique to introduce additional main and minor crops (i.e. cereals and fava bean) and to protect soils from erosion was introduced in the experiment, in combination with no–till. The farmers have already expressed their willingness to introduce strip cropping into their hillside farms. Their interest derives from the fact that the technique, appropriately adapted, could contribute to widening the range of products they can sell and to reducing the risk of erosion that is currently a serious problem in the area.

A set of criteria (and an associated handbook of methods for measurements) was defined during the first months of the DiverIMPACTS project to assess the benefits of crop diversification in the network in relation to expected impacts: