On 27 June 2017, the actor group of the DiverIMPACTS case study 1 on breaking maize monoculture held its first meeting. The group accompanies a research project with the focus on forage production and crop rotation. 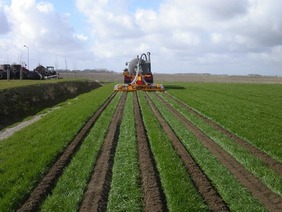 Field trial in Wageningen (The Netherlands) with a mixed crop of wheat and maize. (Photo: Guy Akkermans)

It consists of dairy farmers, breeders of maize and grass varieties, suppliers (fertilisers and feeds) and research organisations (e.g. Wageningen University & Research). Its research focusses on the possibilities of intercropping silage maize with service crops, such as undersown grass or a mixture of rye and winter pea in combination with very early maize varieties. The different cropping systems are tested under different tillage systems (ploughing versus non-inversion or minimum tillage).The tested systems aim at improving soil and environmental quality while increasing forage production. The project also comprises model calculations in order to identify new rotation options on dairy farms ranging from intercropping to rotation of maize with other forage crops or arable crops.

The actor group meets 3-4 times a year. During the meeting of 27 June, a short outline of the DiverIMPACTS project with special attention to this case study was presented. The group is willing to get involved in the DiverIMPACTS case study, preferably in combination with meetings of the research project.

Additionally, there was a discussion about the progress in the experiments and about the nitrogen dynamics of rotation of grass with arable crops like maize or potatoes. At the end of the meeting, the group paid a visit to one of the field experiments. The next meeting is planned for 13 October.