This website no longer supports Internet Explorer 11. Please use a more up-to-date browser such as Firefox, Chrome for better viewing and usability.
HomeCommunicationsNews

How can the capacity to support innovation be developed? Two series of co-innovation workshops paved the way to shift from doing things better to doing better things. 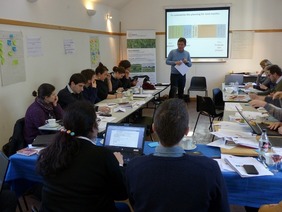 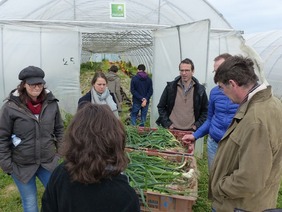 A look into diversification of greenhouse vegetables at the INRA study site in Alénya, France. Photo: Walter Rossing

One of the tasks of the DiverIMPACTS project is to create a ‘learning-for-innovation platform’ consisting of the 25 case studies in 5 innovation clusters. The case study teams are composed of a case study leader (responsible for the strategy and operational decisions in the case stuy) and a monitor (in charge of developing and evaluating the social dynamics of the multi-actor group involved in crop diversification). The task is headed by a team that implements a methodology called co-innovation.

Three series of co-innovation workshops have been devised to develop human capacity to address innovation projects from a ‘double loop learning’ perspective. This means not only learning to improve actions and get better results (single loop), but also reflecting on these results: who needs to be involved to take ownership of change process? What do stakeholders need to engage in crop diversification? Does the case study deliver that? Are improvements possible?

The first series of workshops was held from October-December 2017 with principle aims of getting to know the case studies and introducing the way of working. The second series ran from January-April 2018 and the third is planned for the beginning of 2019.

In the co-innovation approach, much emphasis is put on the human dimension: change happens when humans change their behaviour. Thus, it is relevant to understand what people need to change their behaviour towards more diverse cropping systems. ‘Anchoring’ these behavioural changes should be supported by the societal organizations people work in, such as companies, NGOs or public entities.

In the co-innovation workshops, this resulted in hands-on development of action plans, which started by developing a vision and mission, and a causal analysis for each case study, as well as identifying the human networks relevant for the case studies, and the entry points for change. After the workshops, case study teams discussed their action plans with other case study actors in order to further develop the innovation agendas.

The second workshop round showed the teams’ efforts to identify and address actors relevant for change. While in the first round many of the activities were focused on the traditional field and farm levels, in the second round, teams addressed actors in long and short value chains, as well as consumers and citizens. Some of the teams now have very clear innovation agendas, which can effectively support crop diversification activities. Others will continue to build relationships with actors before proceeding to changes on-the-ground. The third round of co-innovation workshops will allow case studies to assess progress, barriers encountered, and ways to overcome them. In this way, teams can benefit from each other’s experience as they move forward.