As part of the conference, which was held by ÖMKI on 30 September 2020, there was a session on Organic Cereal and Soybean Cultivation. More than 90 people, including farmers, consultants and other people working in the agriculture sector registered for the event, which they could follow live and also review later. The session included an online field workshop and provided an overview of DiverIMPACTS case study 7: Diversification of cereal-based rotations with soybean. 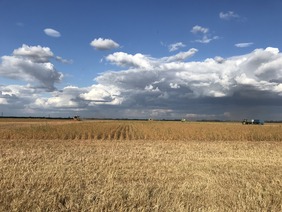 Harvest of secondary crop at the end of September. Photo: ÖMKI 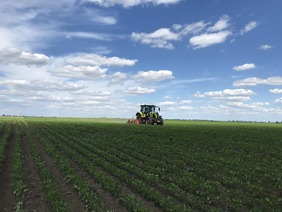 The session began with presentations from ÖMKi about the findings of their latest field research. The participants were the first to learn about the results of the tests on organic winter wheat varieties in 2019-2020. Following this, Éva Borbélyné Hunyadi, the leader of the DiverIMPACTS case study, spoke about secondary cropping. As part of the case study, ÖMKi has been planting soybean after winter barley in their on-farm experiments for three years in order to test secondary cropping as an alternative for soybean production (photo 1 and 2). One positive result from the field experiment was that weed pressure was lower in second-seed soybeans. This is because warm-loving weeds with high habitus have less time to grow. Another interesting result was that despite the shorter growing season, the thousand-seed weight and protein content can reach and may even exceed those with longer growing seasons. Damage to the Helicoverpa armigera, and Vanessa cardui can be a high risk in the case of late sowing in summer. A positive change compared to previous years is the increase in the seed of super-early varieties available on the domestic market, which is a requirement for the success of the second sowing.

In addition to the possibilities of organic soybean production, the audience was also able to learn about the current difficulties and critical factors with regard to agro-technology, plant protection and farm organization.

Farmers involved in the case study then reported their practical experiences, raising specific problems they faced and outlining some possible solutions. Two farmers gave an in-depth presentation of their own cultivation technology, and their experiences growing soy as a main crop. The audience was also able to learn about the experience and techniques of a third farm where soy is grown as a secondary crop. Here, the participants received detailed information about the technical solutions which allowed them to continually increase the efficiency of mechanical weed control, and to stabilise yield averages. They were also able to learn about the factors which pose the greatest threats to successful soybean cultivation.

Participants were invited to submit written questions to the speakers, who answered these at the end of their presentations. The participants found the professional information provided to be very useful, and that it could be put to practical use. They also said that there was a need for other, similar professional forums. During the workshop, the problems and critical issues, which should be the focus of future research, became clearer.