In 2015, DiverIMPACTS partners Arvalis and Terres Inovia initiated experimental platforms in several French arable crop regions in order to design new cropping systems that combine productivity, profitability and respect for the environment, and which support farmers in changing their practices. 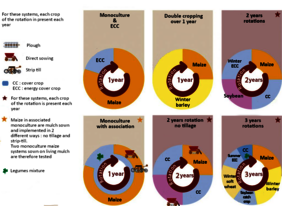 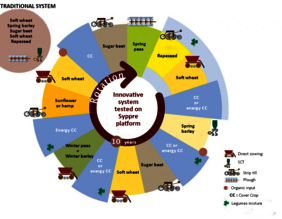 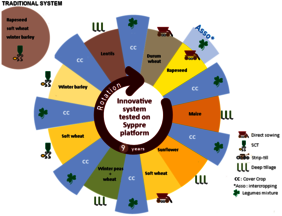 Arvalis, the Sugar Beet Technical Institute and Terres Inovia share the goal of producing new technical references and tools to support the transition to cropping systems that reconcile productivity, economic profitability and environmental protection. This requires a shift towards new production systems, based on both ecological intensification and technological innovations, which are adapted to local conditions and manageable by farmers. Thus, in 2015, they initiated a collaborative project called “Syppre: Building together innovative cropping systems for tomorrow”, which involves national and regional stakeholders. The Syppre project has three parts: monitoring centres for current cropping systems, experimental sites and farmer networks.

Of the five Syppre experimental sites, three have been integrated into the DiverIMPACTS project. Depending on regional pedoclimatic and market specificities, the main fields of study are adapted. For example,

With the Syppre methodology, several innovative systems are evaluated in comparison with a standard system, which is representative of the current typical rotation in each of these areas.

Innovative systems rely on a number of levers such as the introduction of legumes as a main crop, multiple cropping and intercropping, especially to add nitrogen to the system. The length of soil cover is increased to simplify tillage, reduce weed pressure, enhance fertility and limit erosion. The cover crops are implemented to produce biomass, which is either exported from the system or returned to the ground.

Figures 1, 2 and 3 show the innovative systems that have been set up since 2015.

Some of the early results collected from the three initial years of experimentation show that each innovative crop diversification system enables better environmental performance in comparison with traditional cropping systems. However, the desired level of performance is not yet achieved as it requires some time to manage new crops effectively and to introduce new practices/techniques into the systems. Besides, some strategies have proven to be relatively poor choices, especially those oriented towards productivity, which have had low agronomic and environmental benefits so far (e.g., choice of maize in winter crop-based rotation in Berry, or winter barley between two years of maize in Bearn).

While overall productivity and profitability indicators are still unsatisfactory, the positive environmental impacts are promising. Nevertheless, these indicators are not necessarily mutually exclusive, and we expect productivity and profitability can be improved with time. We are looking forward to collecting additional data each year to reach a better assessment of the “system effect”, such as soil fertility and the overall potential of each innovative cropping system.